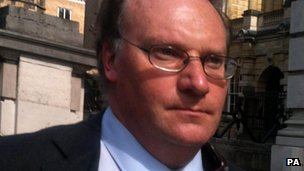 A teacher has been jailed for 11 years for sexually abusing five boys at public schools in Berkshire and Kent.

He also abused two boys, aged between eight and 10, while working at King’s School in Rochester, Kent.

Roth had denied 17 offences, including sexual activity with a child and indecent assault.

The police investigation went back to the 1980s and concluded with Roth’s arrest in 2009.

Roth denied all the charges against him, accusing his victims of conspiring against him because they did not like him as a teacher.

Before handing down the sentence, Judge Simon Davis described it as a “sad and dreadful case”.

He told Roth he had “abused his position of trust”, adding: “You carefully chose your targets.”

Wellington College’s master Anthony Seldon said he was “deeply sickened and appalled” by the case.

He said Roth had been suspended as soon as the accusations were reported.

“During the subsequent investigations we have worked closely with the authorities to ensure that no stone has been left unturned and that the police managed to gather sufficient evidence to lead to a conviction,” he added.

If you were subject to abuse or you know of a friend or relative who was please get in touch in the strictest of confidence.

Lisa has more than 20 years’ experience of dealing with Personal Injury matters ranging from road traffic accidents to workplace injury and liability. She offers a sympathetic and professional approach to her clients’ problems and advises on funding options (including insurance and Conditional Fee Agreements.)

Her extensive knowledge of the Civil Procedure Rules, skills in evidence gathering and analysis of liability and causation, and experience in risk assessment and settlement negotiation make her a valuable asset to clients and colleagues alike.

She is also a member of Verisona Law’s Historic Abuse Team and undertakes documentary analysis, work relating to case evidence and the development of legal arguments to secure successful settlements. She is fluent in German and Persian.

Lisa also has experience in Civil Litigation regarding Debt Recovery, Breach of Contract, and Insolvency Law.

"Lovely, friendly, great people. Very understanding too and very good at what they do. Very happy with the result, many thanks again Lisa and everyone involved in my case."
Anonymous

"I would like to express my profound heartfelt gratitude to Lisa Gafarov for all her hard work and understanding when representing me. She fought passionately for my case for two years.

Within this time, never once did I feel it was about the money for her. She was very considerate and dealt with many personal matters in a caring and professional way. It was a very sensitive case but she put in a lot of hard work and went the extra mile each time. Her wide range of expertise was indispensable during this difficult time. Because of this I trusted all her advice and as a result, this took a lot of pressure off of me.

She managed to reach a very amicable conclusion between the defendants and myself. You don’t know how much your passion impacts the lives of others. For this I am forever grateful. I would recommend your firm a hundred times over."
Anonymous, April 2019

Lisa studied ‘Contract Law, European Law and Employment Law’ as part of her degree in BA (Hons) Business Administration. She has also studied other business subjects, including accounting.

Having completed her degree, Lisa started work for Verisona Law in November 1999 in the Personal Injury department as a Trainee Litigation Clerk and since then has developed extensive skills in relation to personal injury litigation and case preparation.